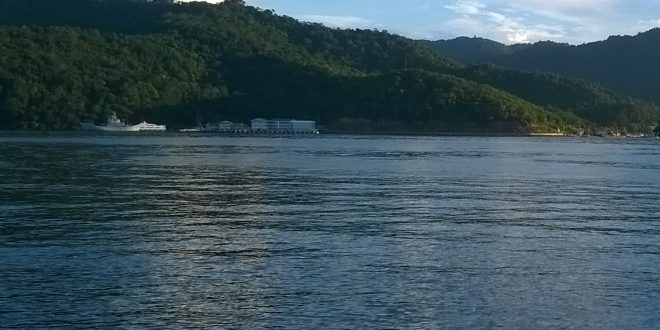 Down the Islands. Photo: Annisa Phillip

First visit to Salt Pond – Down the Islands 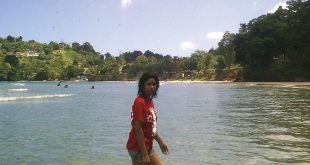 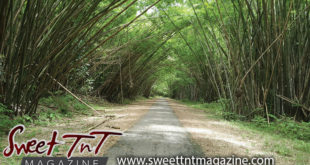 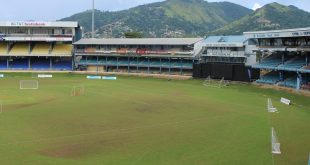 The Oval – memories of my first visit

By Omilla Mungroo. We built our camp hurriedly alongside the small, red-brick structure which housed two water-tanks. These were reserved for the lighthouse keeper, our friend. It was the neatest tent we ever managed to set up: the blue tarpaulin was new and stood stable against the forceful Easter winds. How those winds howled! They portended something horrible. In spite of that, we couldn’t wait to go exploring again. It was old Mr Pete, a rugged-looking fisherman and lone camper, who spoke about the Salt Pond every year.

Whenever he passed near our campsite, he would stop for a while carrying a brown sack, slung sloppily over his shoulder, which always seemed to be full of fish. He would relate stories of the island while my aunt made him coffee. Mr Pete had cloudy, ancient eyes, dark, mapped skin and wore the same dingy clothes every day. He gave us tips on where the biggest fish could be caught. This information always pleased the boys in camp. We believed Mr Pete knew Chacachacare Island like the back of his hand. If he said the Salt Pond was worth visiting, it was.

We packed our gear early and left camp after lunch on the first day. Our goal on this trip was to find that Salt Pond. The regular hikers – my sister, her boyfriend and his brother, my cousin, my uncle: the oldest, most humourous member of camp, his friend and I, set out.

Not too far from camp my good-natured cousin, Ryan, wondered aloud if we might see the famous “buck”, usually described as a short, midget of a man, wearing a wide-brimmed hat which covered half his face, and wearing a poncho draped over his entire body. He was said to be “sighted” at several different spots across the island, but everyone knew he was fictitious. My uncle, however, made a u-turn to head back to camp. He was not the bravest of the lot but he wanted to see the Salt Pond. We joked along the way, reviving Mr Pete’s stories. These included ghost stories, and accounts of illegal drugs being brought in by Venezuelans.

Two camps before, my brother had told us about a night when he was fishing on the jetty. One by one the other men had left with their fishing rods and buckets, until it was only him and one man at the other end – about ten yards from him. He said he noticed the man could not sit still and was about to go across to him for company, when, during blinks of sleepiness, he saw him walk away from the jetty and into the sea, hat, poncho and all! Of course, Ryan told my brother that he was probably too tired that night.

“Tired?” My brother had answered ironically. “Not me again on that jetty alone in the night! That was the buck for sure!”

The Salt Pond seemed to be waiting for us

Anyway, we hiked across that day; an invincible bunch of us. The Salt Pond seemed to be waiting for us. It was a large body of sea-water, trapped inland, about twelve yards from the sea – an amazing sight! Trees and bush surrounded it, but an open space was cleared to the front, facing the hill which overlooked it. This was the point from where we first glimpsed its greenish outline. Getting there was challenging but worth it. The view was spectacular! My sister’s boyfriend took some pictures. Then skirting down the hill instead of following the track, we stood facing it. I thought the pond looked too still and mysterious. An impending gloom settled upon us.

We decided to survey the white, pebbled shoreline instead and had not gone very far when my sister’s boyfriend let out a yodel. It did not echo like he expected it to. Then we heard voices: loud, unclear shouts coming from the far end of the shoreline. The seven of us huddled closer into the thick bush near the Salt Pond and peeped out. Ryan, my cousin, pointed to the sharp bend which cut away to the far back of the island. Of course, there was the outline of a pirogue! Then we counted five big men! Obviously they didn’t know we were there, but we wasted no time deliberating on plan B – to get back to camp promptly.

This unexpected intrusion took us quite by surprise and while scampering through the slush near the Salt Pond, Ryan fell into it. We urged him to get up quickly but he was pointing to a log on the bank and stammering. His eyes seemed wild and he could hardly talk, but he swore that the “buck” was sitting on that log, laughing at him. Concurrently, the men’s voices sounded louder. Yes! They were indeed Spanish!

We scampered up the trail very quickly, like squirrels with their tails in the air! My uncle’s friend had pulled Ryan out of the mud. He looked very disoriented, and only spoke when we were halfway back to camp.

“Never me again!” My uncle panted. We all wondered about the men and their boat, and although we explained to Ryan that there was no one sitting on that log, he insisted that he saw him, with his big sombrero covering his eyes, and his dark gray poncho draped around him, laughing sarcastically at him… and at us, I suppose.

This trip to the Salt Pond took place on Glorious Saturday, the Easter weekend of 1994. Except for the sighting of the men and the pirogue, and the laughing “buck” everything else is true. If you ever visit Chacachacare Island, you can look for the Salt Pond. It is still there, sprawled and waiting, with its eerie silence and mysterious stillness. On our second trip, we found the remains of a crocodile, but that’s another story!

Blown away by Argyle Waterfall in Tobago

Shark River a place to relax

A romantic surprise at Fort Abercromby

Icacos – the end of Trinidad

Runaway to Salybia with family

A relaxing afternoon at Plymouth

Chacachacare – come to my island

Moruga a little village right off the shoreline

Road trip to the Toco Lighthouse

Temple in the sea in Waterloo

A day at the Emperor Valley Zoo

A walk through Palmiste Park

The Oval memories of my first visit

A view of Fort James in Tobago

The look-out at Mount St Benedict

An alternative mode of transport between Port of Spain and San Fernando. The water taxi sails from The Breakfast Shed (Femmes du Chalet) on Wrightson Road in…

We care for all learners – delayed, distracted, unfocussed, accelerated, outspoken, quiet and more. We believe in creating an environment that allows each student to learn at his or her own pace. We aim to bridge the gap between a struggling student at the primary level and their success at exams at the secondary level.

Megan Subero, 25, created the ideal gift for children to learn about the culture of Trinidad and Tobago. Lil Trinbagonian is a coloring book with activities based on heroes, national events and birds in the twin islands. The coloring book is designed for children ages 5 to 10 to enjoy the educational activity-based content while having fun. Las Cuevas Beach is the only blue flag accredited beach in Trinidad and Tobago. This … 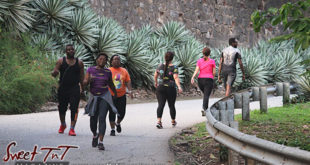 As the Carnival season fast approaches, scores of people flock to gyms, sporting facilities and …